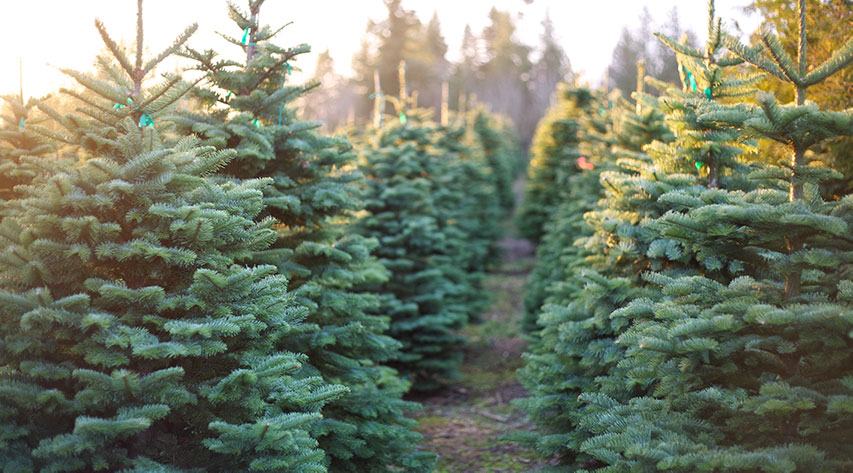 How to choose a real Christmas tree

At Christmas time, we all fall into one of two camps...real or artificial tree? If you're a supporter of the traditional real tree you're in the right place! Buying a real Christmas tree often marks the start of the season and choosing from the types of trees available is an adventure all in itself. So how do you choose a real Christmas tree?

Measure. It’s well known that trees always look much bigger once you actually get them into your home – especially if you picked yours up from an outdoor retailer. You don’t have to specifically break out a tape measure, but definitely maintain perspective. Always keep size in mind when you’re choosing your tree, and try not to get carried away.

Do you want to be needle-drop free? It’s possible to pay a premium and get a tree that’s needle-drop free. The first thing to consider is that they’re very rarely completely needle-drop free. However, the difference between a non-dropper and a normal tree bought off a forecourt can be substantial. You might still get a bit of needle drop, but you won’t find yourself wading through two inches of them by Boxing Day.

Make sure you get a fresh tree, as it’s far more likely to last the season. The best way to check this is to give the tree a nice tap on the ground; if a load of needles fall off, then the tree is already on its way out and you should go for a different one.

There are a range of stunning real Christmas trees available over the festive period in the UK, but all have their own positive points. Deciding which tree you should buy depends on a range of factors including how the tree will look, the size of the room you’re putting it in, value for money and, perhaps most importantly, how much mess it’s going to cause by dropping needles.

The Nordman Fir is the best-selling tree in the UK today, with deep green foliage and bigger, softer needles than the spruces. It generally has a full shape and with the proper care will retain its needles until long after the Christmas festivities are over. Nordmans are British-grown and offer a full bodied shape. The foliage is usually rich and shiny. The classic Christmas tree by all accounts.

The Fraser Fir is the second most popular Christmas tree. It is similar in appearance to the Nordman, but with slightly shorter needles that have a silver colour to their underside, enhancing the overall colour. This tree also has a very pleasant scent. It’s a slim tree, so works well for smaller rooms and will cling onto it the majority of its needles until you decide to take it down.

The Norway Spruce is the traditional choice, which, for many years was the only tree used at Christmas. It bears light green foliage with short, fairly sharp needles. Its popularity has declined in recent years as other species have become more readily available at affordable prices but it still remains good value for money.

If you’re looking for something that’ll last beyond the festive period, consider a pot-grown tree. While most Christmas trees in the UK are sold cut – chunkier, hardier pot-grown versions are available too in a range of species.

A pot-grown tree has every chance of being successfully transplanted to the garden after the season has finished, adding extra value and appeal.