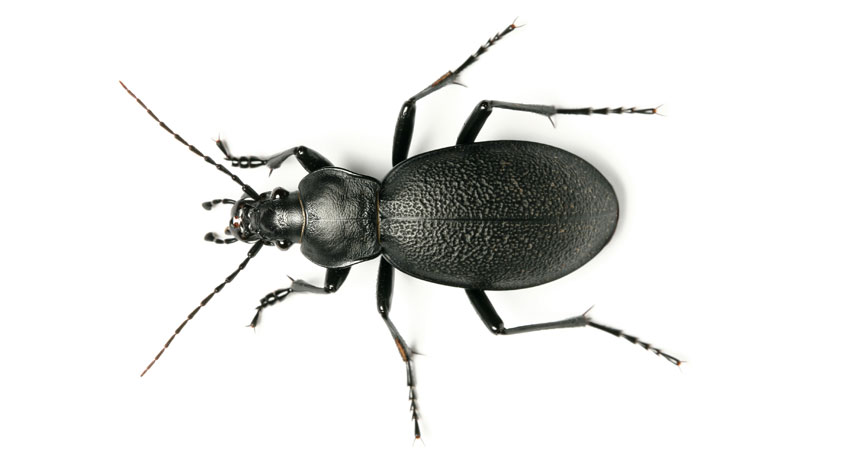 You’ll find numerous different beetles rummaging around in your garden. Some are serious plant pests, devouring plants, while some are harmless or even beneficial.

There are numerous different beetle species that are common in just about every garden. Some are completely harmless and have no effect on us, or our plants, but are fascinating to watch. Others are beneficial – devouring plant insect pests as part of their diet. Sadly, others are serious plant pests.

The adult beetles’ front pair of wings are hardened into wing cases, forming part of a particularly hard exoskeleton, which gives them the appearance of being “armour plated”! This distinguishes them from most other insects.

Some beetles can fly, whereas others are flightless and move around by walking.

The larvae or grubs are the other part of their lifecycle you may see on your plants or in the soil. It is usually the larvae of beetle species that are plant pests that do the most damage.

These are gardeners’ friends. They may scavenge for dead or dying plant material, helping to tidy up the garden, or they feed on other insects and other small animals, many of which are pests on our plants.

We all know ladybirds, but others to encourage include ground beetles and rove beetles which, as their name suggests, move around on the ground looking for food. Many even eat our number one pest enemy – slugs.

The worst beetle insect pests are:

But there are some other, more minor, beetle pests.

Flea beetle
Flea beetles are small beetles and feed on the leaves of brassicas and related plants, including radish, rocket, swede and turnip, as well as nasturtiums and wallflowers. They create a peppering of small, rounded holes in the leaves, which look unsightly. When disturbed, the small beetles jump off the plants onto the soil.

Pollen beetle
Pollen beetles are more of a nuisance than actually causing any damage. They are small black beetles that infest the flowers where they eat the pollen. They only really become problematical on cut flowers brought into the house. You may be able to shake them off the flowers before bringing them indoors. Or place the cut flowers in a shed or garage, near to a window or open door. The beetles are attracted to the light and will leave the flowers.

How to control beetles

Obviously, you want to encourage ladybirds, rove beetles, ground beetles and other “goody” beetles to help you keep pests under control. Pest beetles will need controlling.

Squash the larvae or remove them and the leaves they’re feeding on as soon as you see them.

Careful hoeing around affected plants, so as not to cause any damage to the roots, may kill overwintering pupae, or expose them to foraging birds and other animals.

There are numerous chemical insecticides available that will kill soft-bodied insect pests, such as beetle larvae. Just bear in mind that the majority of these are what is known as “contact” insecticides. That is, you have to spray the actual insect (make contact with it) to kill it. If you miss some, these will not be affected. Also, most are based on “organic” or “naturally-occurring” materials and have very little persistence once sprayed on to the plant.

A systemic insecticide which also kills on contact – is absorbed by the leaves and moves all around inside the plant, so can kill the larvae and adult beetles when they start to eat the plant.

The correct timing of spraying is usually essential to kill the larvae, and especially before they cause extensive damage. Spray as soon as you see the newly hatched larvae are on the plants and are feeding.

There is usually nothing you can do to actually prevent beetles attacking your plants in the first place.