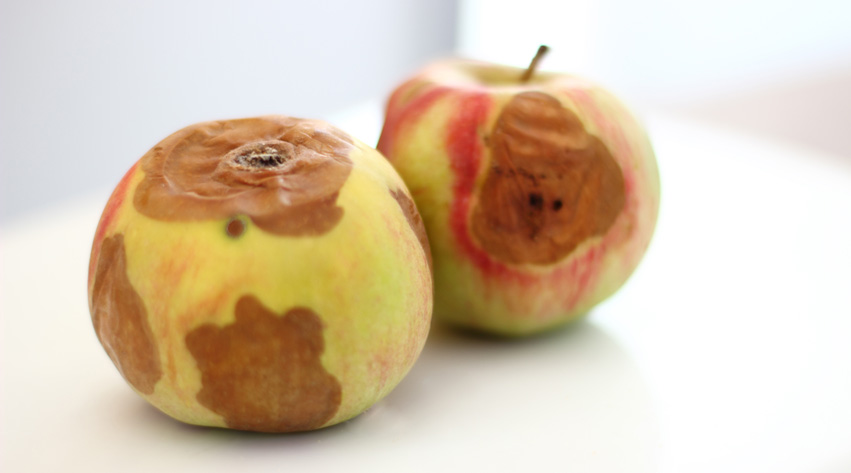 Brown rot is a fungal disease of fruit – especially apples, pears and plums – causing the fruit to rot. Shrivelled “mummified” fruit remain in the tree, spreading the disease.

What is brown rot?

Brown rot is a fungal disease of fruit that causes them to turn brown, shrivel and rot. It can happen while the fruit is developing on the tree from mid-summer onwards, or when the picked fruit is in storage. Affected areas are inedible, making the whole fruit inedible once the disease coverage is more-or-less complete.

Sometimes, as the affected fruit rots, buff-coloured pustules, often in concentric rings, appear on the surface of the fruit.

Affected fruit don’t always fall from the tree in autumn and remain on the tree throughout winter as shrivelled, “mummified” fruit. Where these touch the bark they create cankerous infections.

Sometimes in spring, during flowering, the flowers and the leaves on the fruiting spurs turn brown and shrivel up. This problem is known as blossom wilt and is caused by the same fungi. This forms a further source of the fungus to attack the fruit later in the year.

What is brown rot caused by?

Brown rot disease usually starts when the fruit skin becomes damaged or wounded, allowing the fungus infection to enter the fruit. The wounds and damage can be caused by numerous things, including apple scab disease, birds, codling moth, frost and hailstone damage and wasps. The disease then spreads out from the source of damage to eventually cover the whole fruit, making it inedible.

The fungus overwinters in the rotten and “mummified” fruit and stem cankers, releasing spores in spring that cause the blossom wilt. These infections then release further spores to infect the fruit.

How to control brown rot

Keep a regular check on fruit trees and remove any fruit developing brown rot as soon as you see it.

Carefully pick up fallen, rotten fruit and rake up fallen leaves – especially in autumn – to reduce disease carry-over through the winter and into spring.

Remove all rotten, “mummified” fruit that stays on the tree in autumn.

Prune out blossom and fruit spurs affected with blossom wilt to reduce the amount of fungus available to infect the fruit later in the year.

Always dispose of infected growth, either by burning it or put it in the council’s green waste bin. Don’t compost it.

Unfortunately, there are currently no fungicides generally approved for home gardeners to use to treat diseases on edible crops.

Use plant protection products safely. Always read the label and product information before use. Plants in flower should not be sprayed due to possible danger to pollinating insects. Either spray early in the morning or late in the evening when pollinating insects are less likely to be active.

As brown rot infects the fruit through wounds and other damage, wherever possible protect the tree from these sources. Cover trees with horticultural fleece to protect against frost and hailstones, net to reduce bird damage, and control codling moths.

Some plum varieties have resistance to brown rot.