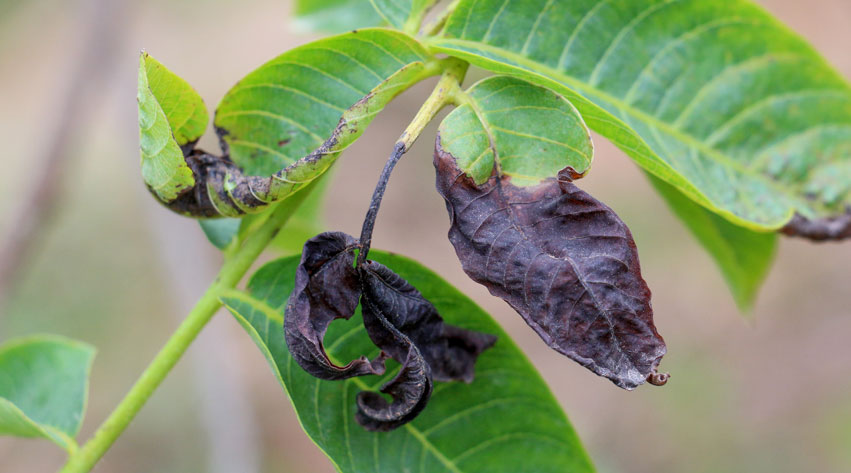 What Is cold and frost damage?

Severely cold temperatures, below which the plant can normally tolerate (is used to experiencing in its natural habitat), frosts and even cold and especially strong winds can all affect, damage and even kill plants.

The main damage is caused when water freezes. As it does so, it expands, rupturing the plant cells and causing them to die.

New and young plants are usually more susceptible to cold and frost damage than fully established ones, since they haven’t built up their natural cold resistance and their roots haven’t become established in the new soil or compost. Young plants may also have been grown in a heated greenhouse and the sudden change in temperature causes significant damage.

While it’s obvious that so-called tender plants – including most half-hardy annuals and bedding plants and some “exotic” vegetables, such as tomatoes, cucumbers, peppers, aubergines and squashes – will be damaged or killed by frosts or temperatures below or just above freezing point (0C/32F), many so-called “hardy” plants can similarly be damaged. This is particularly true of the new, young growth in spring, since it has not yet developed the toughness of older, more established growth.

Plants can also be damaged when the soil or compost freezes. At the very least, this prevents the plants’ roots from absorbing water, so they take on the symptoms of drought [LINK]. At the worst, the roots are actually killed, meaning the whole plant starts to wilt and may eventually die.

If the soil or compost only freezes for short periods – such as overnight, but thaw out during the day or for only a couple of days on end – the damage will probably be minimal or slight. However, if the freezing goes on continually for several days, then severe root death occurs and the plants will suffer much more damage and are often killed. Sometimes, the damage isn’t noticed until mid- to late spring, or even later, when the plant comes into growth. Only then do they need large amounts of water which, because the roots are dead, they don’t receive. They then wilt and die for no seemingly apparent reason, the damage having been done some time ago.

Plants growing in containers are more susceptible to cold weather damage. As the roots are above the ground, they don’t have the benefit of the surrounding soil for insulation, which plants growing in the ground have.

Cold winds, especially strong, cold winds – can also cause similar damage – especially when combined with cold temperatures and frost. The wind acts like a vacuum cleaner – literally sucking water out of the leaves, and more quickly than the roots can replenish it, causing them to be damaged and/or die. This is worse when the soil or compost is frozen.

Plants regarded as hardy, protect themselves in a number of different ways from cold weather.

Some accumulate materials, such as sugars and amino acids, in their cells that act as “anti-freeze” lowering the freezing point of the cell. The shortening day length in autumn induces this to happen.

The cell contents of some plants “super freeze”, meaning the cell contents remain liquid even though they’re below freezing point. This is a far more effective mechanism. Plants have to experience several days of cold weather before the freeze for this to happen, which explains why even hardy plants can be damaged by a sudden autumn frost.

How to prevent cold and frost damage

Grow plants that are reliably hardy and suitable for your conditions. Grow slightly tender plants in a warm, sunny position, such as a south-facing position or close to a south-facing wall, which will provide extra warmth. Avoid planting in frost pockets.

Plants not regarded as being hardy – frost and cold tolerant – should be overwintered in a frost-free place. For plants in leaf, the best places are heated greenhouses and conservatories. Those not in leaf can go into sheds and garages, as they don’t need light to maintain them over the winter.

This is easy for plants in containers, but not so for those established and growing in borders. In which case protect them by wrapping them up with horticultural fleece and even insulating materials, such as straw.

Plant out tender bedding and vegetable plants after the danger of frost has passed; this is usually from late May to early June, depending on where you live. Always harden off plants for 10-14 days before planting out, steadily acclimatising them to outdoor conditions. Remember to lift them again for overwintering frost free before the first frosts of autumn. Dahlias are usually left until the first frost has blackened the foliage.

Cover susceptible plants with horticultural fleece or other suitable protection materials whenever frost or freezing temperatures are forecast.

Move plants growing in containers to a greenhouse or conservatory to protect them. If this isn’t practical, move them to a more sheltered position, such as the base of a south-facing wall, and insulate the pot. You can make “pot duvets” by filling plastic bags with straw, polystyrene chips, roof insulation etc, and tie them around the pot. Or use bubblewrap.

Mulching the soil with a 5-10cm (2-4in) or thicker layer of organic matter, such as bark or compost, will help insulate the soil and help prevent frosts and cold temperatures penetrating the soil and so damaging the roots.

Avoid feeding with nitrogen-rich fertilisers after about mid-summer as they promote soft, sappy growth that is especially vulnerable to cold and frost damage. Feeding with sulphate of potash or a high potash fertiliser helps to toughen up the growth, making it more resistant to cold damage. Using sulphate of potash in late summer or early autumn will help toughen up soft growth of borderline hardy plants left in the garden.

Leave the previous year’s growth on tender plants, such as penstemons, salvias and “hardy” fuchsias, until spring. This provides frost protection for the developing buds on the stems.

The spring flowers and young growth of some plants, including camellias, magnolias and pieris, can be damaged by a single frost if they’re exposed to early morning sun after a frost, as they thaw out too rapidly.

If plants have been damaged by frost and cold, don’t give up on them straight away. Many can rejuvenate from dormant buds, but this isn’t necessarily a quick process, and plants may not recover until mid- to late summer.

When no further frosts or cold temperatures are expected, you can prune out damaged growth, cutting back to undamaged growth. Then apply a general-purpose granular fertiliser.

In gardens regularly exposed to cold winds, create shelter by planting a hedge or shelterbelt.