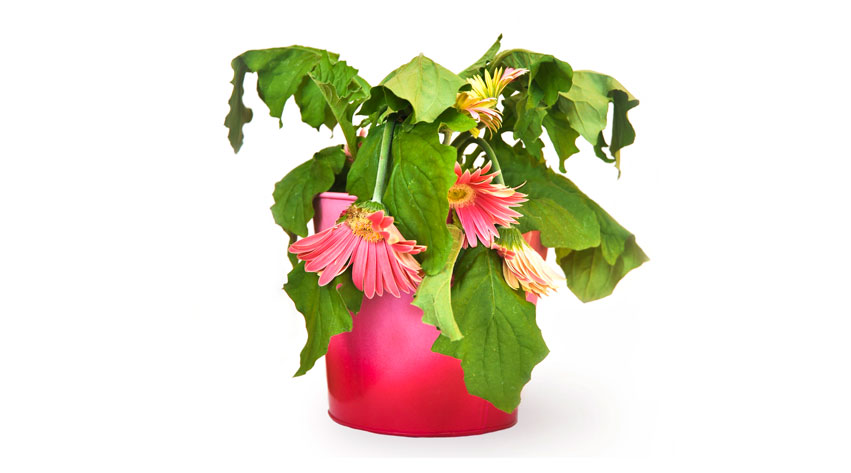 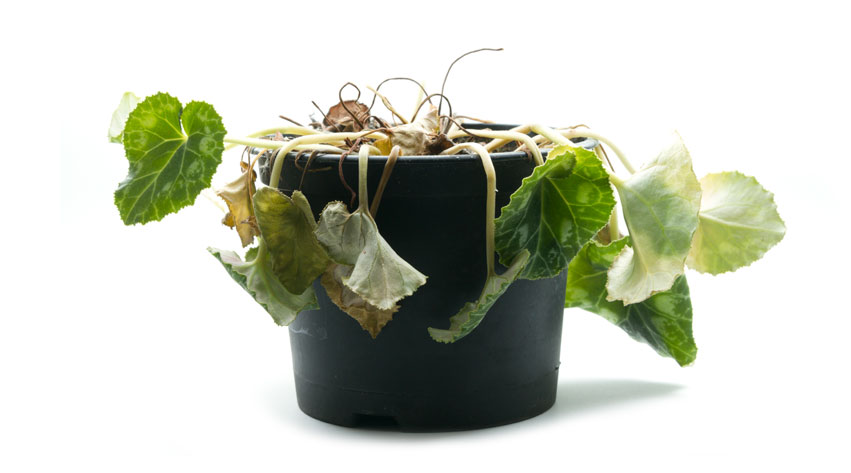 Nearly all plants need a constant and regular supply of water for their roots to absorb. If this is interrupted plants start to wilt and can eventually die.

What are drought and underwatering?

Nearly all plants need a constant and regular supply of water for their roots to absorb and so ensure strong, healthy growth. The notable exceptions are cacti and those plants with succulent leaves, which can go for very extended periods without receiving water, since they store reserves in their stems or leaves respectively.

If the supply of water is interrupted or restricted, plants start to wilt leading eventually to their death.

While the obvious reason for wilting is a lack of readily available water in the growing medium (soil or compost), other things can lead to drought or drought-like symptoms.

Vine weevil grubs, cutworms, leatherjackets and chafer grubs and cabbage root fly are insect pests that eat plant roots. Their damage also results in plants wilting. Affected plants continue to wilt and die, no matter how much water is given to them.

Interestingly, the effects of waterlogging, flooding and overwatering are very similar to drought and underwatering! In overly wet and waterlogged soils, the water replaces air in the tiny air pockets between the soil particles. As roots need air to breathe, they suffocate and die, leading to limited water uptake and wilting.

Drought symptoms are always worse in light sandy soils, which drain freely and don’t hold on to moisture, and in very heavy clay soils in summer.

New and young plants are usually more susceptible to drying out and drought conditions than fully established ones, since they haven’t built up a fully developed root system.

As plants become established, and their roots grow deeper into the soil, they are able to tap into deeper water reserves. Shallow-rooted plants don’t have this ability to get down into moister soil. These include azaleas, camellias, heathers, hydrangeas, rhododendrons and some conifers.

Plants can also show symptoms of drought during periods of cold and frosty weather when the soil or compost freezes. At the very least, this prevents the plants’ roots from absorbing water, so they take on the symptoms of drought. At the worst, the roots are actually killed, meaning the whole plant starts to wilt and may eventually die.

Plants growing in containers are more susceptible to drying out, drought and cold weather. As their roots are restricted, they can’t go off and find reserves deeper in the soil. So, they are totally reliant on you for supplying all their watering (and nutrient) needs.

Strong winds can also cause similar damage, especially when combined with cold temperatures and frost. The wind acts a bit like a vacuum cleaner – literally sucking water out of the leaves, and more quickly than the roots can replenish it, causing them to be damaged and/or die. This is worse when the soil or compost is frozen.

Underwatering and irregular watering – cycles of drying out and flooding – can cause other, more specific problems in some plants. This includes blossom end rot in tomatoes.

How to prevent drought and underwatering

When watering plants growing in the ground, a good thorough watering – ensuring the water penetrated deep into the soil – is much better than a little and often approach. The latter encourages surface rooting, making plants more susceptible to drying out and drought.

Mulching the soil with a 5-10cm (2-4in) layer of organic matter, such as bark or compost, will help insulate the soil and help reduce water loss, prevent weed seeds from germinating and help insulate and protect the roots from hot and cold weather.

Control weeds, which will use up valuable soil moisture reserves.

Keep the compost in containers evenly moist, without periods of overwatering and drying out.

Add water-retention gel to compost and soils to act as a reservoir of water, readily available to plant roots.

In gardens regularly exposed to strong winds, create shelter by planting a hedge or shelterbelt.