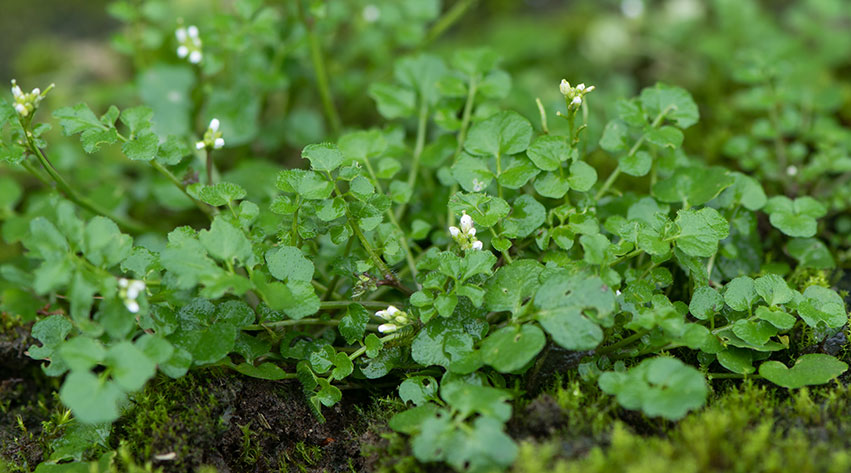 What is hairy bittercress?

Hairy bittercress is a very common annual weed, appearing in both cultivated and uncultivated bare soil. It regularly grows in containers and may be introduced into the garden when buying new plants.

Plants grow very quickly, and several generations appear each year. Seedlings can appear at most times of the year and, as it is cold hardy, it survives through winters. It can even flower during mild winters. As a result, it quickly cover beds, borders and other parts of the garden.

Plants produce numerous seeds, which are explosively released from the seedpods, scattering the seeds far and wide.

These seeds can remain dormant in the ground for several years. And as “One year’s seeding means seven years weeding”, allowing plants to flower and produce seeds, means several years of trying to control and remove it.

Where does it grow?

Hairy bittercress plants are usually upright and only a few centimetres high, but flower stems can grow to 30cm (12in) high. They produce rosettes of small, deep green, rounded leaves.

The tiny white flowers produce seedpods that open explosively to disperse the seeds several feet away.

How to control hairy bittercress

As with most weeds, never allow hairy bittercress to become established, and certainly don’t allow it to flower and produce seeds. This will make it more difficult, and more time consuming, to fully control. Early identification and eradication is important to stop it taking over the garden.

Regularly hoeing seedlings and young plants as soon as you see them is the quickest and easiest method of control. The aim of hoeing is to sever the weed stems at or just below ground level, cutting the top growth from its roots. A sharp hoe blade will make this even quicker and easier, so always sharpen the hoe blade before using it. Hoeing on a warm and/or windy day will mean plants quickly dehydrate and die.

Digging out the plants when they are more established is more time consuming and more difficult – especially where they’re growing among wanted plants.

Flame guns and weeders that use an electric current are also effective in some locations.

Covering bare soil with weed-control membrane (landscape fabric) or even thick black polythene will exclude light and prevent seeds germinating. As will mulching the soil with organic matter, such as a bark mulch. For mulches to work properly, they need to be a minimum of 5cm (2in) thick, but 7.5cm (3in) deep works better.

There are a number of weed control options available to treat hairy bittercress. In addition to traditional weedkillers there are now also a range of more natural alternatives.

Any weedkiller can be used to control and kill hairy bittercress in beds, borders, waste ground and on paths. Those marketed as “fast acting” are contact weedkillers – killing or damaging the plant tissue they are sprayed onto or make contact with. These tend to be based on “naturally-occurring” active ingredients, such as acetic acid and natural fatty acids.

Systemic weedkillers that also kill the roots can also be used.

Weedkillers (except lawn weedkillers) are total weedkillers – that is they will damage or kill any plants whose leaves they are sprayed onto. Make sure you keep the spray off wanted plants – including lawns – and, if necessary protect plants by covering with polythene or similar when spraying.

Use weedkillers safely. Always read the label and product information before use.

Never allow plants to flower and set seed. Although this should be pretty easy in your garden, it’s more difficult to stop seeds coming in from a neighbour’s garden, any surrounding fields and waste ground and even further afield.

Always check when buying new plants for hairy bittercress growing in the pot. Although there may also be numerous seeds in the compost too.