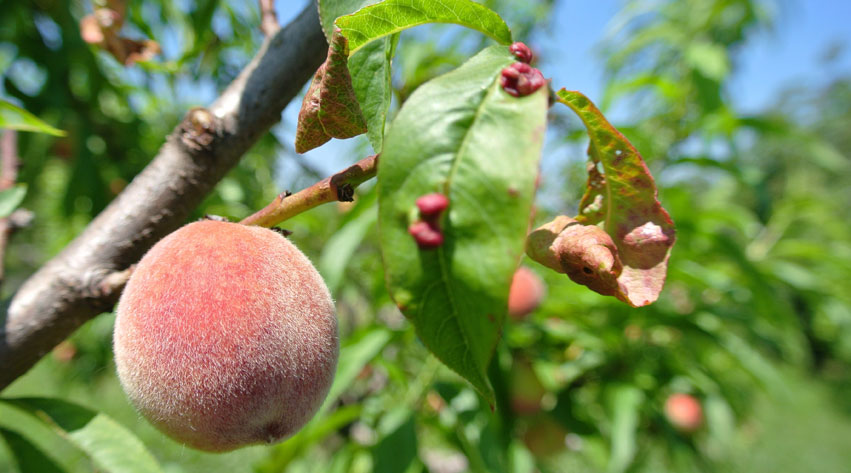 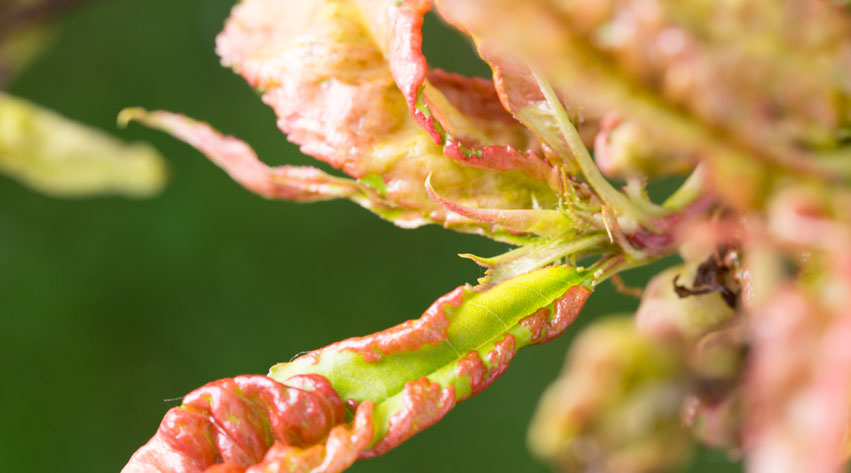 Peach leaf curl is a fungal disease that attacks peaches and nectarines and sometimes almonds and apricots. It produces distorted leaves with red blisters.

What is peach leaf curl?

Peach leaf curl is a fungal disease that attacks peaches and nectarines, and sometimes almonds, apricots and ornamental Prunus trees. As part of its scientific name suggests (deformans), it produces very deformed, distorted, crumpled and thickened leaves. Affected leaves also produce blisters, which are red at first, turning white later on as a bloom of fungal spores develops.

Diseased leaves tend to fall off the tree rapidly and prematurely, causing severe defoliation. This leads to a reduction or loss of the crop that year and, if trees are affected year after year, a gradual decline in overall health and a loss of vigour, resulting in much reduced crops.

Although peach leaf curl mainly attacks the leaves, stems and fruit may also be affected.

Disease attacks start in spring as the new leaves are unfurling and enlarging, and cool and wet conditions are needed at this time for infections to occur.

What is peach leaf curl caused by?

Taphrina deformans, the fungus that causes peach leaf curl, overwinters on the soil or on fallen leaves or within the tree’s buds. In spring, during wet weather, the disease spores on the ground are splashed back onto the new buds and leaves. When the buds break, the fungus penetrates the leaves, causing the distortion.

Once established, a white bloom of spores appears on infected leaves. These drop to the ground when the leaves fall prematurely, or remain in new buds and cracks in the bark, forming the stage that will affect trees the following spring.

Affected trees may produce a second flush of leaves to replace fallen leaves, and these should remain unaffected.

How to control peach leaf curl

Try to keep trees growing as strongly as possible to help them fend off disease attacks. However, when large outbreaks of peach leaf curl occur, this may not prevent it. Early identification of affected leaves is essential.

Carefully pick off and dispose of affected leaves as soon as peach leaf curl first strikes to reduce or slow down its spread. This is highly unlikely to actually eradicate the disease. When affected leaves have the white bloom of fungal spores, make sure not to disturb them, or you will spread the disease further. Enclose them in a plastic bag before removal.

Carefully pick up all affected fallen leaves to try and reduce disease carry-over through the winter.

Prune out any badly infected growth in late spring or summer and dispose of it by either burning it or put it in the council’s green waste bin. Don’t compost it. Pruning at other times of year may encourage bacterial canker disease.

Unfortunately, there are no fungicides available to home gardeners to control peach leaf curl.

If peaches, nectarines or almonds are fan trained along a wall or fence, you can make a tent from plastic sheeting attached at its top length to the supporting structure. Roll this down to soil level at 30-45cm (12-18in) away from the base of the tree and secure with bricks or similar. As moisture is needed for the disease to occur, the tent will keep water off the tree, and prevent spores splashing back from the soil to affect the new leaves. The warmth created will also give some protection against cold weather and frost. Keep the sides open and even lift the polythene during warm days when the tree starts flowering to give access to pollinating insects.

The tent should be put in place after leaf fall in autumn and kept in place until mid- to late May.

It is usually not possible to protect free-standing trees in this way to prevent disease infection, unless they’re small enough – such as patio trees.

Some peach varieties are claimed to show resistance to peach leaf curl. Bear in mind that over time such resistance can break down.