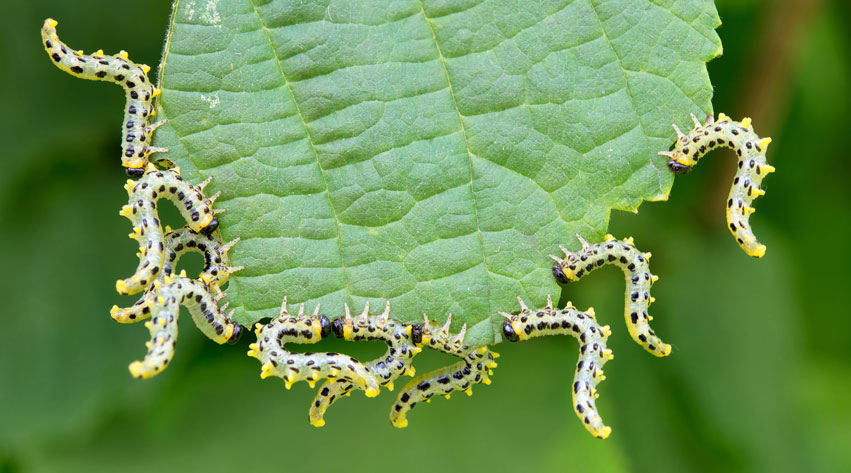 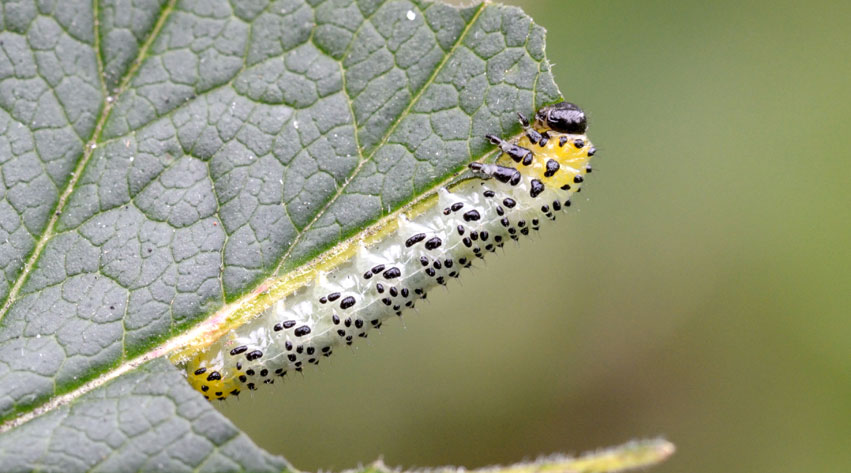 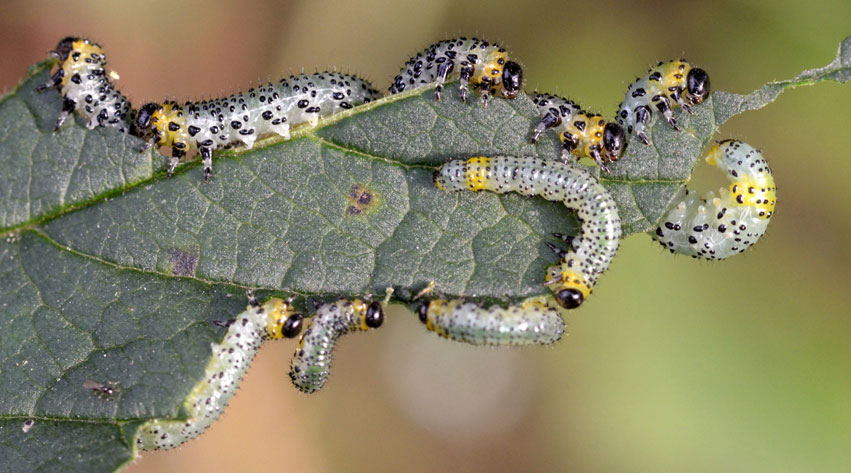 Sawflies are winged insects, which look like flies but are more closely related to bees, wasps and ants.

The common name comes from the female’s saw-like egg-laying device (ovipositor), which is used to cut into the leaves where they lay their eggs.

The adult sawflies can measure up to 2cm (¾in) long, but most are around 6-10mm (¼-½in). They generally have black or dark coloured bodies. The female adult lays eggs in small to large batches, usually on the underside of the leaves, where they are easy to miss, usually from mid-spring to early summer.

The eggs hatch into larvae that look very similar to butterfly and moth caterpillars, which they are easily mistaken for, generally measuring around 2.5cm (1in) long. Slugworms are smaller. They can be white, grey, brown or black in colour or spotted with other colours. The larvae immediately start to devour their food source.

Some species have more than one generation of adults per year, so eggs can be laid at different times throughout the year. The gooseberry sawfly, for instance, has up to three generations per year, with larvae feeding from April to June, July, and August to September.

When fully grown, the caterpillar-like larvae stop feeding and pupate. Most drop to the ground, create asilk cocoon and pupate in the soil.

Several different plants, but the main ones are:

The caterpillar-like larvae are hungry feeders with voracious appetites, often devouring huge amounts of foliage. They can strip a plant of all its foliage – almost overnight in some cases.

Apple sawfly feeding results in fruit that is usually misshapen with a long ribbon-like scar around the circumference. Further feeding continues within the fruit, the damaged fruit have maggot holes (not to be confused with codling moth) and drop from the tree early, in June.

Rose leaf-rolling sawfly produce tightly rolled leaves in which the larvae feed. It shouldn’t be confused with leaf-curling aphids.

Rose slugworms are also sawfly larvae. They don’t eat the leaves, but graze away at the leaf surface, producing a slightly skeletonised effect. Pear and cherry slugworms are similar.

As they feed, the larvae produce large amounts of excrement that drops onto the plant below where they’re feeding, spoiling them.

How to control sawflies

Once the eggs hatch into larvae, control can be difficult. It is important to check susceptible plants regularly – one day they look fine, the next all the leaves are gone – and deal with any you see as soon as you see them.

You can easily control eggs and a small numbers of larvae by either squashing them or scraping them off with kitchen tissue or similar.

The larvae can be controlled using the biological control based on a mixture of nematodes.

Careful hoeing around plants, so as not to damage the roots, to the extent of the branch or stem spread may kill overwintering pupae, or expose them to foraging birds and other animals.

There are numerous chemical insecticides available that will kill soft-bodied insect pests, including sawfly larvae. The majority of these are what are known as “contact” insecticides. That is, you have to spray the actual insect (make contact with it) to kill it. If you miss some, or others come on the plant after spraying, these will not be affected and will carry on feeding. Also, most are based on “organic” or “naturally-occurring” materials and have very little persistence once sprayed on to the plant. This means you have to spray regularly to control them.

A systemic insecticide which also kills on contact – is absorbed by the leaves and moves all around inside the plant, so will control future attacks from insect pests, for up to two months.

You can protect plants from attack by covering them with a physical barrier – such as insect-proof, fine-mesh netting or horticultural fleece. Just bear in mind that plants must be pest-free before covering – especially check for eggs – otherwise you’re providing a protected environment for the larvae to carry on feeding – and the female adults can get through any breaks in the barrier. While this may not be possible for large plants or ornamental plants, where the covering will spoil their appearance or prevent pollinating insects getting to the flowers, it is perfect for the fruit and veg garden.