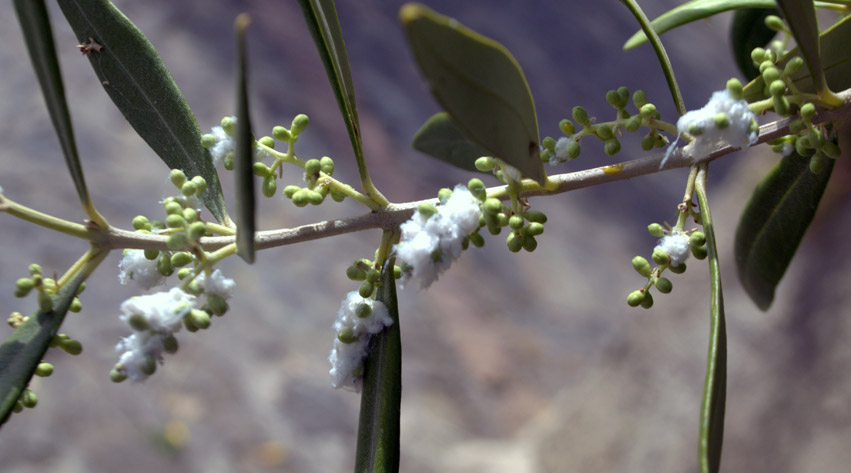 (Eriosoma lanigerum) Like other aphids, woolly aphids are small, sap-sucking insects that attack and damage plants. They cover themselves in a “woolly” covering for protection.

What are woolly aphids?

Woolly aphids are small, sap-sucking insects that cover themselves in a white, waxy, woolly-looking secretion. This disguises them and gives them some protection from predators and from being affected by some chemical, contact, insecticides. The actual aphids themselves, underneath the woolly covering, are black or brown in colour.

Unlike most other aphids, woolly aphids mainly suck sap from the woody stems, rather than the leaves, but may also attack buds and leaves.

The woolly covering means they are often confused with mealybugs or even fungal plant diseases.

Numbers reach a peak by late summer, when winged forms fly away to look for new host plants.

Woolly aphids overwinter as a small, immature stage, which hide in crevices on the stems and branches or in cracks in the bark.

Being sap suckers, aphids extract sap from the plant by using their piercing mouthparts. Even quite small infestations can cause reduced or stunted growth. Large well-established plants are rarely severely damaged, but can be weakened.

As they feed, they cause lumpy, often irregular, swellings to appear on the bark. These swellings may split open in cold and frosty weather, causing damage to the tissues below and creating entry wounds for fungal diseases.

As they feed, woolly aphids excrete a sugary, sticky substance, known as honeydew, which drops on to the stems and leaves below where they’re feeding. This not only makes the plant sticky, but the sugar attracts sooty mould, which can cover the whole leaf with a black deposit that reduces or prevents light reaching the leaf and so reducing the plant’s overall vigour.

Ants feed on honeydew, so signs of ant activity may be a symptom of aphid attack.

How to control woolly aphids

Aphids breed very quickly – producing live young – and just a few woolly aphids can produce millions of aphids over several months. Once numbers build up, control becomes more difficult. When large numbers are present, more damage is done to the plants, and this will affect your plants more severely. So, it is important to check plants regularly, going out on Pest Patrols, and dealing with any you see – as soon as you see them.

You can easily control a small numbers of woolly aphids by either squashing them or removing and destroying the plant parts where they are congregating and feeding.

Woolly aphids have a lot of natural predators – including ladybirds, hoverflies, lacewings, earwigs and some species of birds. So always do what you can to encourage these into your gardens. Incorporating plants that are high in nectar into your planting schemes is certainly one way to encourage them, as is providing secure overwintering sites – even putting up “bug hotels”.

Unfortunately, early in the year, aphid infestations often build up to damaging levels before these natural predators are active enough to control them. Some suppliers of biological controls also sell ladybirds and lacewings – either as the adult or the more voracious larvae – that you can release into your garden to help the endemic population.

You could try blasting colonies of woolly aphids with a strong jet of water from a hosepipe. However, those aphids not killed by this method could be dislodged and end up on other parts of the plant, so spreading the problem.

There are numerous chemical insecticides available that will kill soft-bodied insect pests, such as woolly aphids. The majority of these are what are known as “contact” insecticides. That is, you have to spray the actual insect (make contact with it) to kill it. If you miss some, or others land on the plant after spraying, these will not be affected and will carry on feeding, breeding and building up the aphid numbers. Also, most are based on “organic” or “naturally-occurring” materials and have very little persistence once sprayed on to the plant. This means you have to spray regularly – which could be as often as every couple of days in a warm summer – to stand any chance of controlling them.

Contact insecticides are unlikely to penetrate the waxy coating on woolly aphids. A systemic insecticide (BugClear Ultra) – which also kills on contact – is absorbed by the leaves and moves all around inside the plant, so will control future attacks from insect pests, for up to two months.

There is very little you can do to stop woolly aphids attacking susceptible plants. Spraying affected deciduous plants with a winter tree wash may help to kill the overwintering nymph stage and so reduce the outbreak the following spring.