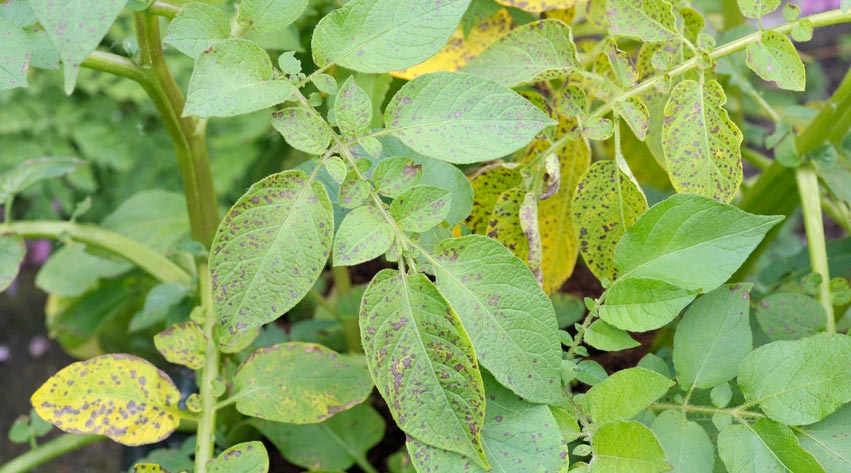 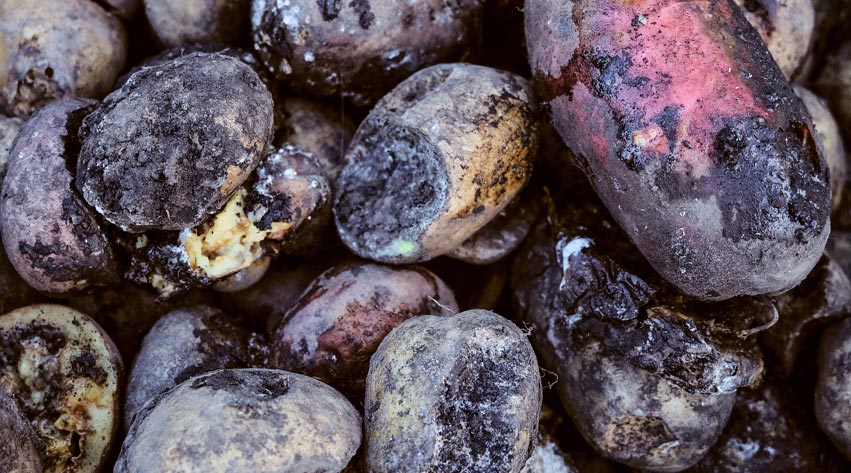 What are phytophthora diseases?

Species of Phytophthora are responsible for a small number of significant, but very important plant diseases. These can severely damage the plant involved and can also lead to total dieback and death of the affected plant. The most significant are potato and tomato blight, phytophthora root rot, phytophthora bleeding canker and ramorum dieback.

Phytophthora root rot is the most common cause of root decay in a wide range of trees and shrubs. Root systems of even large trees can completely rot away.

Symptoms: Visible symptoms on the leaves and stems don’t often develop until the root decay is well advanced. These symptoms are typical of the plant being unable to take up water and nutrients from the soil by its roots, and include wilting, yellowing or sparse foliage and stem dieback. Waterlogging, drought, root pests and other root diseases cause similar symptoms.

Symptoms: Bark infection producing cankers that bleed a dark, sticky fluid. Dead bark falls away on older cankers, exposing the wood. Rapidly spreading infections cause branches to die and even death of part or all of the tree. Sparse and pale foliage.

This disease is sometimes referred to as sudden oak death, but this name should be restricted to the USA, as it rarely attacks oaks in the UK.

It is a notifiable disease, and outbreaks must be reported to the Animal and Plant Health Agency (APHA) or by email at [email protected]

Symptoms: Symptoms are very variable, but include: brown, spreading lesions on the leaves; cankers or lesions form on stems, spreading onto leaves; wilting and dieback; areas of dead bark, known as bleeding cankers (see above), oozing a black or brown liquid; on larch the needles become purple or black and drop prematurely.

This is the most devastating disease of both potatoes and tomatoes. See our page on potato blight and tomato blight for full details.

Several species of soil-borne Phytophthora cause damping off in seedlings.

What are phytophthora diseases caused by?

Phytophthora is a fungus-like organism. It spreads by tiny spores swimming in a film of water in the soil or by splashes of water on affected leaves and stems. Spread is favoured by wet, damp or humid conditions.

These spores can only travel very short distances, but Phytophthora also produces long-lived resting spores that are released into the soil. Long-distance spread occurs when the spores, or soil that contains them, are moved during cultivation or transplanting, on footwear, or are carried in drainage or run-off water.

How to control phytophthora diseases

Try to keep plants growing as strongly as possible, as this may help them fend off bacterial attacks. However, this is unlikely to control virulent outbreaks.

Once infected, there is nothing you can do to control these diseases. As infected plants are a source of infection for otherwise healthy ones, digging them up and destroying them should be considered as a means of stopping the disease spreading.

Plants affected with phytophthora bleeding canker and ramorum dieback may be saved by completely pruning out affected stems and branches. Cut out all affected growth, pruning back to healthy wood at least a few inches below the diseased growth.

As this disease is always worse in overly-wet or waterlogged soils, improving the drainage can greatly reduce the risk of plants succumbing.

Affected plants should be destroyed and the soil where they were growing removed and replaced with fresh topsoil. Replant with less susceptible species.

Unfortunately, there are no chemicals available to home gardeners to control phytophthora diseases.

Some plant species are more resistant to phytophthora root rot than others.