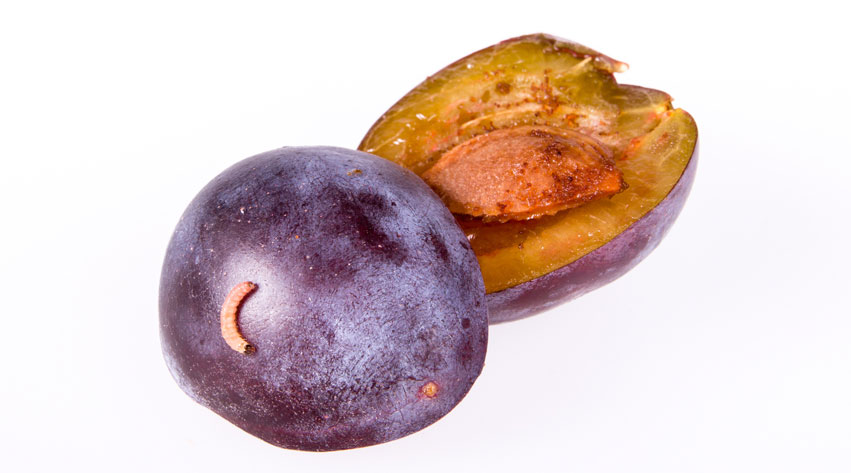 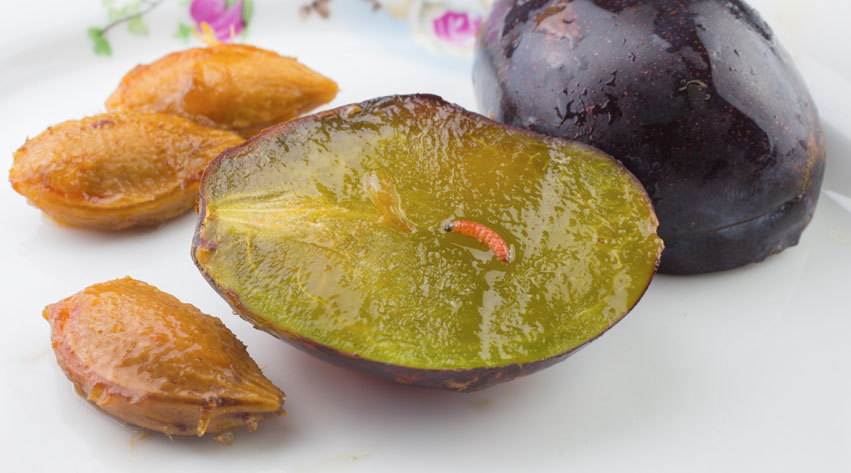 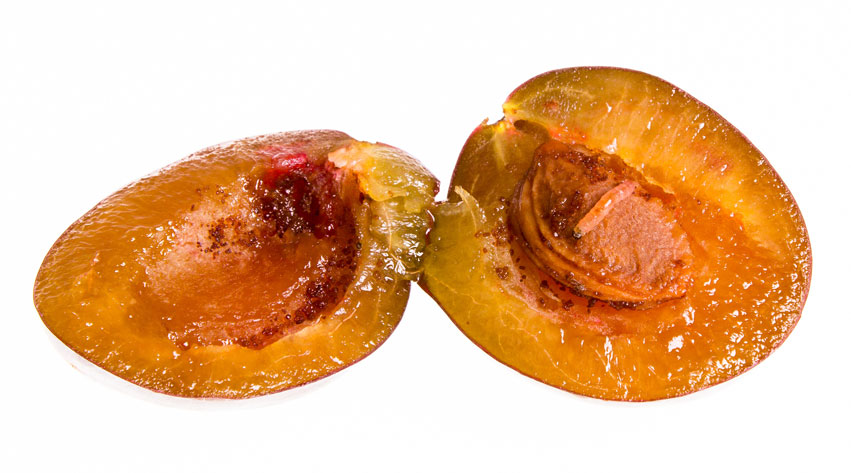 (Grapholita funebrana)
Pink plum maggots – actually the caterpillar larvae of the plum moth – live in and eat the fruit of plums and related damsons and gages, causing “maggoty fruit”.

What is plum moth?

Pink plum maggots – actually the caterpillar larvae of the plum moth – live in and eat the fruit of plums and related damsons and gages, causing “maggoty fruit”.

Adult plum moths are small and have a wingspan of 1-1.5cm (around ½in). The forewings are dark brown with blackish markings and the hind wings are brown.

The adult moths start to emerge from late May, but mainly from mid-June to mid-July. They mate, and the female adult moths lay eggs singly on the underside of the fruit. The eggs hatch into small creamy-white or pinkish, brown-headed caterpillars.

The caterpillars then tunnel into the fruit and feed on the flesh around the stone until late summer. Then, when fully fed, they emerge from the fruit and pupate inside silk cocoons, overwintering in concealed places, including under loose bark. During hot summers, caterpillars can pupate early and produce a second generation of moths in late summer.

What does it do?

Plum moth caterpillars cause extensive damage to the inside of plum, damson and gage fruit. Their feeding activities make the fruit inedible, unless caught early when the damage may be more limited – although the fruit probably won’t have ripened adequately by then.

Infected fruit may drop from the tree prematurely and may be misshapen.

Their damage to the skin is also a source of entry for brown rot disease.

How to control plum moth

Once the caterpillars have burrowed into the fruit, there is nothing you can do to control them. Any control methods have to be used before they enter the fruit. This means that the timing that any controls are used is critical. As weather and temperature conditions change from year to year, this may affect exact timings.

Plum maggot pheromone traps, which are designed to monitor adult plum moth activity, may also give some degree of control. They trap the adult males, resulting in the females laying fewer fertile eggs. They should be hung in the tree from early May. Pheromone traps on their own rarely fully control plum moths, but usually significantly reduce damage.

A biological control, based on a mixture of nematodes, is available from several mail order suppliers.

Using grease bands on the main trunk of the trees offers no control of plum moths as they can fly. These grease bands are used to control wingless winter moths.

Using a plum maggot pheromone trap, which monitors the level of moth activity, will help predict the best time to start using any insecticidal sprays with more accuracy.

There are several chemical insecticides available that will kill soft-bodied insect pests, such as plum moth caterpillars. The majority of these are what are known as “contact” insecticides. That is, you have to spray the actual insect (make contact with it) to kill it. Most are based on “organic” or “naturally-occurring” materials and have very little persistence once sprayed on to the plant. This means you have to spray more than once to stand any chance of fully controlling them. Start spraying in June.

A systemic insecticide (BugClear Ultra) – which also kills on contact – is absorbed by the leaves and moves all around inside the plant, so may provide better control.

There is nothing you can do to prevent plum moth/pink plum maggot damage.